Snakes Are For Girls 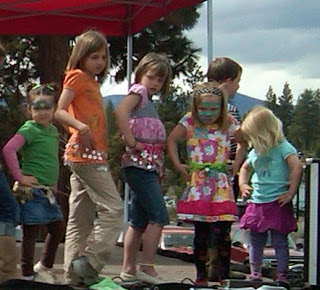 Last weekend I encountered a mom who was having a bad day at the festival. We were in line for face painting, and her daughter wanted to be a tiger. She was fretting.

“I’ve been trying to talk her out of it for the last half-hour,” she confided. “I said, wouldn’t you rather be a princess, sweetie? How about a fairy?”

I nodded sympathetically, holding my tongue. I couldn’t relate to her plight, but neither did I want to be impolite.

Captain Daddy had no such similar nagging inner voice. “She wants to be a snake,” he said, pointing at Chicken Noodle. “I think it’s awesome.”

I thought it was awesome, too. I take it as a sign of victory that casino online in this princess-saturated world, my five-year old chooses of her own free will to have a gigantic blue snake painted on her face. She climbed up into the hot seat after the tiger was led away by her mournful mother. Ten minutes later Noodle had a life-sized reptile winding from her forehead to her mouth. Then she got up on stage and learned to belly dance with Rasha. It was beautiful.

My father was the sort to haul my sister and me into the woods and expect us to love it. We did. Mostly. If we complained, he told us that hardship in the outdoors built character. It did.

Now I want the exact same thing for my daughters.

Yesterday, we took a big long walk in the woods. There was dirt and discovery and rain and crying and running and falling and exploring and laughing and bugs. When we got home, Chicken Little put a fairy and a snake in a chariot. They were on their way to the ball. The fairy’s name was Rainbow Butterfly and the snake’s name was Lola Rose. They were best friends.

After the ball, everyone went to bed happy. Especially me.