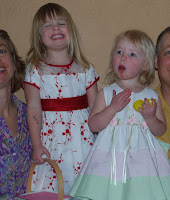 The pressures of parenthood seem to congeal around a holiday like grease on a ham.

We *should* put the chickens in their matching dresses. We *should* achieve a lovely family picture. We *should*dote on the kids (at least not park them in front of a video). We *shouldn’t* let them eat too much sugar. The day *should* be extra special.

Take that heavy carton of adult expectations. Add two children under the age of five. Throw in three pounds of candy. Tack on an early morning ETA at the grandparent’s house. Shake well.

By 8 a.m. I’ve bathed the chickens and begun to wrestle them into their Easter finery. Except that Chicken Noodle refuses to wear her green-with-pink-roses Easter dress. She insists on wearing her white-with-red-roses Christmas dress.

I get in the shower and practice deep breathing, trying to remember it’s not about dresses.

I *should* have mentioned this to Captain Daddy, however. I find him in the kitchen towering over a wailing Chicken Little; clutched in his raised hand is a dripping cup of yogurt. “You’re ruining your dress!” he hollers. “No more until pictures!”

Note to parents everywhere: if you find yourself denying your children breakfast over a hunk of linen and lace, something is wrong.

Fast-forward through much more prancing about; eventually we all move towards the car. Chicken Little face plants in a pile of dirt and gravel in the driveway. Instead of doing something gratuitous like comforting her, Captain Daddy throws up his arms. “I give up! This is impossible!”

“That’s why I’ve decided not to care,” I reply levelly. He considers this. “Hmm, okay. Sounds good.”

Two hours later, Chicken Little’s dress is covered in chocolate, markers, syrup, strawberries, apple juice and crayons. Chicken Noodle’s dress is crumpled in the corner; she is stark naked. We’ve taken a mess of terrible photos. They’ve both torn into enormous Easter baskets. They’ve consumed approximately 1.5 pounds of candy each. Captain Daddy is slumped in a chair reading the newspaper. I am lying prone on the living room floor staring stupidly at the ceiling.

We spend the rest of the day napping and watching videos. Everyone is entirely happy. And you know, it feels pretty darn special.