A Three-Year-Old Could Do That 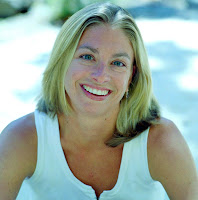 I recently bumped into the professional photographer who took my glamour shot—the headshot I’ve used for magazine bios and my website for the last few years. The photo is only four-and-a-half years old, but friends have been complaining that it doesn’t look like me anymore.

(Aside: Chicken Noodle is also four-and-a-half years old. A coincidence that my entire appearance has changed in the same amount of time I’ve been a mother? I don’t think so.)

I told Carol that apparently, I need a new headshot.

“You know, I would totally do that for you, Kim,” she said.

“Well, I would pay you,” I replied, thinking that, in reality, my glamour shot savings account has a balance of about $1.52 these days.

She read my mind. “Really, who has money to pay anyone for anything anymore?”

Her generosity was appreciated. Still, my respect for the creative process is too great to take advantage of her. At the same time, I don’t want to be one of those writers who persist in using a head shot from thinner, blonder days; the kind that makes people do a double take (and not the good kind) when they see them in person.

So I went home and trolled through my own computer photo files for a semi-recent shot that would update me without breaking the bank. I found one I’ve always liked, taken earlier this year in Hawaii. True, it’s a bit overexposed in the face. But it looks like me, it’s kind of fun and casual, and the background is lovely. Better yet, I already owned it.

I called Chicken Noodle into my office. “Do you remember this?” I pointed at the screen.

“At the Hawaii Zoo!” she said.

“Me!” That kid has an ironclad memory.

I pulled off of my website the picture of that blonde I used to be and replaced it with this one, taken by Noodle when she three. With no offense to Carol (www.carolsternkopf.com), whose talent is clearly superior than my preschooler’s and who I will definitely commission to photograph me prior to my first book publication, I think I’ll go with this for awhile. It feels more appropriate to the economy. 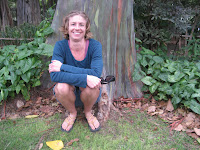 And anyway, it’s good to support budding artists, even if they aren’t in Kindergarten yet.