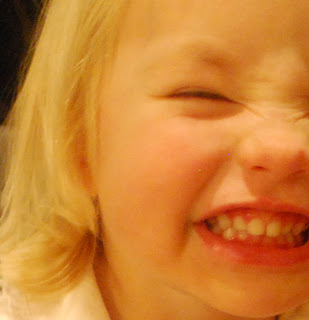 Chicken Little typically appears at my bedside between 5 and 5:30 a.m. “Mommy!” she says exuberantly, as if she herself has already had several cups of coffee and can’t understand my languor. “Is it wake-up time?”
I always have a hard time answering this question. Primarily, because I am in a coma.
But also because no, of course it isn’t wake-up time, it’s clearly and obviously still sleeping and dreaming-of-a-Hawaiian-beach time.
But on the other hand, yes, simply the arrival of this small person grinning and shaking her mop of crumpled white-blonde hair and boinging up and down like a cross between Jack Nicholson in The Shining and Tigger means that, by definition, it’s wake-up time.
Usually I just grunt and haul her into bed next to me with hopes that she’ll go back to sleep, or at least allow me to lay there like a drunken sailor for five more minutes.
This morning she curled up under my arm. “We picked our mommy and daddy at the store,” she announced matter-of-factly. “We said: not that one, not that one, not that one. Yes, you. And, you.” She punctuated these last two statements with tiny jabs at my arm.
“Ummm,” I murmured. “We are so lucky.”
“And you and daddy picked us at the store. You said: not that one, not that one, not that one. Oh yes, THAT one.”
“Mmmm.” I was starting to come to. “Boo boo,” which is what we’ve called her since she was little-bitty, “why did you pick me?”
She put her cheek to my chest. “Because you have the softest, warmest skin in the whole world.”