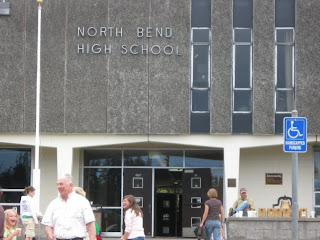 Put 110 people with intermingled pasts and pending mid-life crises in one room, add high expectations, a few cocktails and the pressure to connect in a short amount of time and what happens? Everyone loses their minds. Or at least I do.

I would love to report on my 20th high school reunion, but since it seems that not all of me actually made it there, it may be a bit difficult. I will try anyway.

Here’s a dialogue smidgen:
Overwhelmed blonde girl: “I have…memories.”
Cute tall guy: “Me, too.”
OBG: “The fourth grade.”
CTG: “Yep.”
OBG: “Such a crush.”
CTG: “And English, senior year…there was…something.”
OBG: “Oh, I am sure there was something.”

That’s pretty much how the weekend went. I had many semi-coherent, almost-meaningful exchanges with people who, sadly, I realize are a part of my ongoing existence only in foggy memories. I expected some sort of special bonding only possible between polliwogs from the same pond. I expected a fabulous party, an escape from my grown-up life, the chance to pretend to be 18 again. Instead I got a three-day out-of-body experience, lots of hugs, missed connections, a hangover and a bundle of sadness.

Why the sadness? Middle-aged angst. So many years passed, so many doors closed, so many opportunities missed, so many traumas and joys tucked away, so many permanent decisions made, so much living already lived. Given the dazed expressions on half of the faces in the room, I don’t think I was the only one suffering from this strange sensation.

I underestimated the impact of going back to my hometown and rooting around in my never-to-be-heard-from-again adolescence. Or maybe it’s just that a weekend spent subsisting on vodka, double espressos and Safeway deli is a sure ticket to misplaced self.

In any case, it was surreal. The prom queen’s husband kept bringing me drinks and telling me he loved me. A guy I’ve known since Kindergarten pointed over and over again at my face, repeating, “You were always so nice to me,” like this was atypical. I took the chickens to my favorite childhood beach and kept tripping over the fact that I was the mother, not the child. Some guy told me he spent high school mad at the guy who came between us in the alphabet. One of the few women who has remained my good friend told a classmate who couldn’t remember my name that if he could, she and I would make out. (He couldn’t). Oh, and there was a bomb scare. Someone tried to blow up the grocery store next to my motel.

Perhaps it was one of us, we group of nearly 40s reeling from the realization that sometime in the recent past, the last breath of youth passed us by and we missed it.