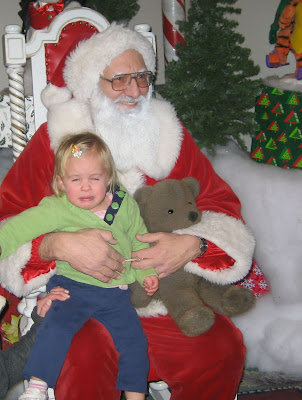 Santa stopped by the chickens’ preschool the other day. Very kind of him to go out of his way like that. Just like Santa to make sure that even the 7 a.m. to 6 p.m. daycare kids whose parents don’t have time to go to the grocery store let alone the mall where Santa normally hangs got to see him this year.
But there he sat, alone in the corner. No kids anywhere near him, his cutie-pie elf, or his pile ‘o candy canes. It’s his season, but Santa looked a little forlorn.
A parent arrived to pick up his child. “Gavin doesn’t want to sit on Santa’s lap,” said a teacher apologetically.
“Oh, noooo,” said Gavin’s father, widening his eyes. “Santa brings the heat. Santa’s got power.” He waved his fingers around and quivered all over, as if Santa were Voldemort, or Idi Amin.
Chicken Little was terrified of Santa until this year (that’s her in the picture, three years ago). She needed a little coaxing the other night, but she hopped on his lap eventually. Probably helped that her baby sis walked right up to Santa and said, “Hi. I want a Rainbow Fairy for Christmas. Can I have a candy cane?”
That kid has no fear.
Some of us never get over our fear of Santa’s power. We cower at the sight of “December” on the calendar, require several dozen cocktails and a few sleeping pills to survive the holidays, and still emerge feeling like we’ve spent a month in a blender.
But isn’t Santa’s power a benevolent one? Sure, he’s kind of overwhelming in that big fuzzy suit. It’s a little freakish that you can’t see his face under all that cotton-ball facial hair. But I think Santa really wants to share his superhuman energy with us all. He doesn’t care how old we are. He does ask that we be nice instead of naughty. But then he’s like—here, take this pile of toys I just whipped up with my magic powers and be off with you. Go be happy. Live strong. Kick some holiday-blues booty. See you next year.
I personally could use some heat right about now—literally and figuratively. I want to be like Chicken Little, to walk right up to Santa (metaphorically) and tell him exactly what I want. I want to soak up Santa’s mojo.
“Santa,” I’ll say, “I’d like to harness your incredible power to finish this book with strength and finesse. I’d also like a trip to Hawaii. Five days spent with family this week without anyone snapping at each other or bursting into tears would be nice, too.
Right on, Santa. Thanks for spreading the heat. You ‘da man. And a big shout-out to the missus, eh?”