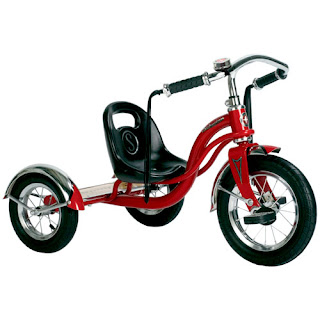 Well, I’m back. You didn’t notice I was missing? Just read the posts written from Thanksgiving until the week before Christmas, especially this one. They were written by my evil twin. Between you and me, she needs to be institutionalized. Or at least heavily medicated.

I must admit that I am not one of those serene, surefooted writers, who ease their way through creative days with persistence and grace. No, I am the kind who hurtles along like an over-stimulated toddler on a new Christmas tricycle, obsessive to the point of compulsive, until suddenly the wheels come off and I careen into the ditch.

Self-doubt and anxiety catch up to me in a swirl of black cloud. I frantically swipe about for my creative self, desperately afraid that if I can’t find her instantly she’ll never come back. If I can’t keep the magic momentum moving, I’ll stagnate and never write another word worth the price of tomatoes. This fear builds. The harder I try, the more I can’t write anything. I become paralyzed. I don’t sleep. I don’t eat. I just quiver there, in the ditch.

It’s been this way forever. You’d think I’d get it by now. During the years I spent writing my first book, I thought that it was just the topic. Once I finished writing about my dead baby, this fear/ocd cycle would cease. Well, guess what? It’s been two years this May since I set my baby book on fire, and still I behave like the poster child for the bat-shit crazy writer.

At least I don’t write with a pint of whisky in my desk drawer. Or a pistol.

Being as it is New Year’s and all, I am going to make a resolution. Next time I get all bonkers, I am going to see it for what it is—indication that the well is temporarily dry, not something else bigger, like, say, my career and identity imploding in a spectacular, traumatizing, publicly-humiliating, soul-destroying end.

“Back away from the computer,” I will tell myself. “That’s it. Real slow. Put down the mouse. Back away.”

I’ve tried everything else, believe me. Nothing but time away from writing cures the frantic paralysis. I seem to require intermittent distance from a project in order to be able to see it again.

I can spend that time gripped in front of the computer, having a gigantic fear-cow but producing only the occasional lonely sentence. Or go to the movies with the chickens, man. Go to the mall. No one cares if you’re bat-shit crazy at the mall.

Anyway, I am back in the saddle now and feeling perfectly excited and capable of finishing my book. I only have three essays to finish for a solid first draft. Of course, now I also have a newsletter and six magazine articles to write.

No matter. As long as she sticks around, Madame OCD can do anything.