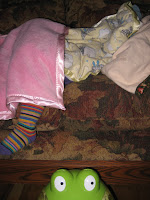 Yesterday afternoon I stood before a row of humidifiers, trying to make a decision. Would it be the adorable, frog-shaped one that would make Chicken Little smile, or the practical, cheaper one that would make sense beyond the animal-appliance-friendly days of young childhood? The world swayed and my mind went fuzzy.

Maybe if I weren’t so tired, I could perform this simple task.

My day had started at 5 a.m. when I’d loaded a croupy and feverish Chicken Little into the car and drove her to the ER. But really the previous day had never ended. I’d been up most of the night with her vomiting, wheezing, hot little self. The ER meds had helped, and we’d spent the day since in a dreamy daze; she’d wanted to be held, so the two of us had curled up on the couch with blankets, videos, and several copies of the New Yorker.

The day had reminded me of so many similar days before, when she (and her sister before her) was a newborn: when having a small person in my lap meant the phone rang and I didn’t answer it; showers were delayed if considered at all; laundry and the dishes languished; nothing was written but maybe a barely sensible email; consciousness swam in and out of focus and bleary-eyed exhaustion became forever correlated with a bliss never known before and never matched again—the utter contentment of holding your own gorgeous child for an entire day; the peacefulness of what it means to finally know the truth of family, and of love.

I reached out with both hands, tucked the frog humidifier under my arm, and headed for home.