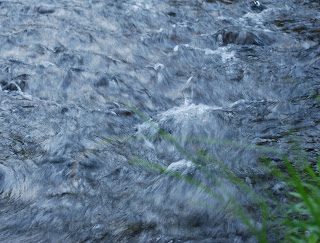 Yesterday I took the chickens to the beach park. Because there are only a couple of places along the river that function like beaches, with sand and water access, this place is a city-population magnet. One of the things I love about it is that it makes for great people-watching. There is also the risk that my girls will be treated to cigarette smoke, the F-bomb, and playmates with blue Mohawks. I just figure it’s diversity training.

Yesterday, temperatures nearing 90, the beach park was packed. I selected a piece of real estate on the sand next to a group of 20-somethings. They had a boom box, beer poured not-so-surreptitiously into plastic cups and lots of cigarettes in plastic ziplocks (handy when one wants to go swimming with cigarettes, a popular local activity). The F-bomb was dropped almost immediately, and the smoke got old pretty fast. But I didn’t mind. I used to be 20, and it was refreshing to hear the music of contemporary artists I’ve up until now only read about in People (so that’s what Lady Gaga sounds like).
No, this post isn’t a rant about young slackers. It’s a rant about bad parents.
A little girl approached my chickens, honing in on their beach toys. I recognized her immediately. She’s at the local parks a lot, always with her dad—sort of. The guy believes in parenting from a distance. I’ve never seen him play with her, even though if she’s reached her third birthday it’s just barely. He’s usually nowhere near her. This time, I didn’t even spot him in the park.
“Where’s your dad?” I asked her after a minute. “Over there,” she nodded. Ah. Yes. 200 yards away, facing the other direction and lying on a towel. Sleeping? No, enjoying a little intimate face time with a woman in a bikini.
I try not to judge other parents. In the past, I’ve tried to give this guy the benefit of the doubt. But this is the river: The river that flows fast and unpredictable and drowns several people a year. And, dude: your daughter, the one there without a life jacket? She is a toddler. See—see how she wades out waist deep towards the current, barely keeping her balance? Oh, you didn’t see that? You are busy up there in the shade getting some? Gee, sorry to bother you.
Cut to half-an-hour later. The guy hasn’t even glanced up. His neglected child spies our bag of snacks, grabs it from Chicken Little and starts two-fisted shoving crackers in her mouth like a wild animal. So quickly I was actually startled, Pseudo-Dad is at my side. “Sorry, she’s eating your food.”
I shrugged, dumbstruck. So, let me get this straight. Her potential drowning doesn’t merit your attention, but her eating some mother’s Ritz does? Dude, I don’t care if she eats my snacks. But I do kind of resent doing your job for you.
After a minute, he wandered away to his hottie Latina. I went back to eavesdropping on the 20-somethings, inhaling second-hand smoke and, oh yeah, parenting.