Baby, You're a Star 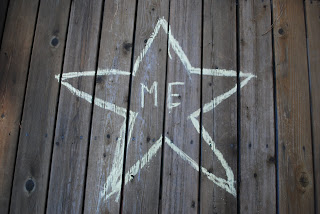 There I stood Friday night, hovering uncertainly in front of a microphone, way more nervous than I should be, and gripping a copy of the High Desert Journal. I’d selected and rehearsed part of my essay to read, waited and watched everyone mingle and sip wine, and now here it was—my fifteen minutes of fame.

I dove in. “We put on the Snake River just before Hells Canyon Dam on a steamy July afternoon.”
Two sentences later: “Ba-boom!”
No—not the sound of me, arriving. The sound of drums. Loud, exuberant drums from just down the hall. “Crash!” Oh yes; cymbals, too.
I read on, inserting sentences between a steady “Dum-ba-da-dum-ba-da-dum!”
Very quickly it became clear that a) the drums weren’t going to stop, b) none of my eight to ten pretending-to-be-rapt audience members were going to do anything about it and c) considering a and b, my reading selection was way too long.
I considered the (sensible and later wished for) idea of coming to a dead stop and instead opted for a “you-go-girl” determination.
The drumming got louder. “Boom-ba-ba-boom crash boom!”
I abandoned emphatic, meaningful interpretation, made drastic, haphazard edits mid-stream and raced through the part of the story where I almost drown.
Every now and then two or three drunk 20-year-olds in skimpy tank tops and three-foot heels—paying me no mind, as if I were a plant, or a hat rack—would skitter in front of me. Presumably in search of the drumming.
I sank into the absurdity, skidded through some lovely, deep thoughts about marriage and risk and fear, and closed to triumphant clapping from at least three people.
Two seconds after my flight from the stage, the drumming stopped. Of course it did.
But whatever—I simply basked in the relief of the whole affair being over and began desperately searching for a very large glass of wine to suck on.
When suddenly, a little fairy woman appeared by my side. “That was wonderful!” she gushed. I stared at her stupidly. “You are an amazing story teller.” Her blonde-grey hair flew in a halo around her head and her cheeks flushed pink with enthusiasm. “I love your work. I can’t wait until your next essay!”
I mumbled a baffled thank you and, after a cocktail, called it a night. As I headed home, I conjured in my head my consolation prize—the mileage I would get out of telling my story over the rest of the weekend.
Now for the multiple choice part of today’s post. The moral of this story is:
A) As an artist, one occasionally needs to be reminded not to take oneself too seriously.
B) One gushing fan is enough to justify any artistic endeavor.
C) Humiliating readings rack up as much PR as smashing-success readings.
D) If you are trying to choose a creative outlet and find yourself equally drawn to writing and drumming, choose drumming.
E) All of the above.
Please submit your answer by 5 p.m. tomorrow. The winner will be awarded the slightly crumpled issue of the Journal read from at this very famous and noteworthy event.